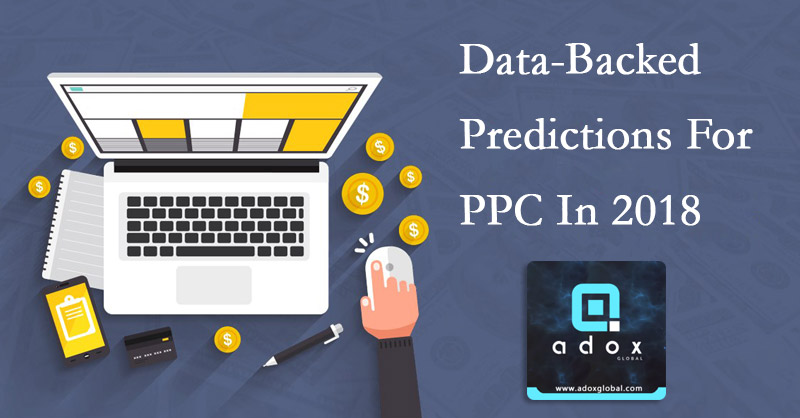 Data-Backed Predictions for PPC in 2018

In the world of PPC, 2018 is going to get bonkers. Between Facebook making drastic changes to the News Feed and the “New Google Ads Experience” set to become the only way to skin the cat, the rise of new ad platforms and the continuation of some of last year’s most popular trends, we’ve got a lot to look forward to (and probably some preparing to do)! And so, here are some of data-backed PPC predictions for 2018!

One thing should immediately stick out in the industry from the past year – Facebook’s growth is truly explosive. The ad platform added 4 million new advertisers in just 18 months, effectively doubling the network, and it’s posed to keep growing in 2018! But there’s ultimately a cap on the number of ads they can serve users while they scroll through their social feeds, which is why Facebook has been growing beyond just Facebook.com.

In 2015, the company made Messenger a standalone platform, and very late in 2017, Facebook introduced a way to monetize the new app with Messenger ads. Now we as we’re seeing Instagram looking to break their messaging equivalent Instagram Direct into a separate app, we should expect Instagram Direct ads to follow suite with ad similar ads.

But Facebook’s ad opportunities are even greater beyond their current flagship products. Over the years, Facebook has acquired 65(!) companies – and the tech giant has invested in everything from Fitness Tracking and Speech recognition to Rural communications.

#2. An Explosion of New Search Ad Formats and Extensions

Google isn’t happy coasting off its flagship search ads. Last year, AdWords retired the standard text ad it had relied on for 16 years to give advertisers more space with their expanded text ads. Google knew that even if search isn’t going anywhere, search was certainly evolving and how we advertisers answer searchers’ questions needs to evolve too.

Through the year, Google has improved their shopping ads to cater towards people differently. Shopping ads remain a staple in any ecommerce advertisers’ campaigns, but late in 2017, Google started serving Shopping Showcase Ads to people casually searching for top of the funnel, non-branded product searches. Google may soon also allow for people who are ready to purchase to convert via a “Buy on Google” extension directly on the SERP!

How we connect with customers via search ads has been evolving quickly too. Google enabled call extensions in 2011 allowing us to place a call directly from the SERP. Four years later, Google enabled advertisers more control over how they drive calls to their business with call-only ads and then two years later enabled call bid adjustments. In 2016, Google allowed us to connect to our customers via text with message extensions.
The next era of communication from our search ads may be with chatbots, as it appears that some brands are experimenting with new chatbot extensions per a late 2017 Bing Ads post.

For perspective, the US population is 323 million, so Google Assistants outnumber us! Add in Alexa, Cortana, and Siri enabled devices and it’s clear that Voice Search is more than just a passing fad. In 2017, 20% of all search occurs via voice search rather than a typed query, and ComScore estimates that by 2020, more than 50% of all search will be driven by voice search!

Optimizing for Voice Search will require a new search strategy. Knowing that people’s natural language is different from their typed queries, you’ll need to prep your content and your ads to answer their questions, rather than match their keywords. Have your content answer questions people will naturally ask their devices such as “Who”, “When”, “Where” and “How” as they complete their searches.

#4. The Rise of Visual Search

Visual search may sound new and experimental to many advertisers, but Pinterest actually grew their platform almost entirely as a visual search engine. Pinterest may not the largest search engine, but it’s effectively grown a monopoly on visual search and more than doubled their revenue each year in the past 2 years!

Visual search is something that’s clearly caught the attention of the big search engines, as both Google and Bing are beginning to play with the feature. In the past, Shopping ads were introduced when people were searching for images, but Bing is preparing this to enable users to search within images themselves.
This visual search would allow users to find that item that they must have – and serve them ads for it along the way.

The keyword isn’t dead – but it’s no longer what controls your paid search. In 2014, we saw keywords lose their meaning when close variants were automatically introduced and then again in 2017 we saw exact match type keywords serve to additional queries including reordered words with functional words added or removed. The keyword is no longer the best way to control who sees our ads – but audience targeting may replace it.

Google’s been slowly expanding its offering of audience solutions over the years – first allowing us to target returning visitors with Remarketing Lists of Search Ads, then our customer lists with Customer Match (first by matching users email addresses, but now by phone number and address as well), and similar audiences for search campaigns. Advertisers can target their ads by demographic and recently based on life events.

On the horizon, Google has plans to allow advertisers to target based on consumer patterns (such as frequently visiting certain types of stores, restaurants, or attending live events), as well as via In-Market Audiences for search ads.

Keywords aren’t the only thing that advertisers are losing control of. In 2017, Google also retired multiple ad rotation settings that advertisers used to test ad copy in their accounts. Google’s penchant for creating ad extensions on behalf of advertisers is nothing new, but they recently also began testing out creating ads for advertisers too – which may have some brand-sensitive advertisers worried.

Many campaign types, including shopping ads, dynamic search ads, smart display campaigns, and Google’s experimental local service ads are all created and managed without targeting keywords or full control of your ad copy!

The Google Display Network is the largest display network in the world, spanning 3 million websites and apps. YouTube is the largest video sharing network with over 1 trillion videos. Even Facebook is quickly growing their audience network.

All this reach provides advertisers with unparalleled opportunity, but not all that content is the best place for you to have your brand associated with.
Some content online isn’t going to be the safest place for your brand. Unfortunately, a consequence we pay for a free and ever-expanding internet is also a growth in sites that feature fake news, polarizing politics, and at time malicious and hateful content.

Google’s strong hold on the search market and Facebook’s fast growth have many saying the two companies are effectively making the digital advertising market a duopoly. A Journal estimates that 77 cents of every new digital advertising dollar in 2017 was spent on either a Google or Facebook property.

Microsoft may be our best change to compete against Google and Facebook. Although Bing is certainly an underdog, it does reach a surprisingly large 35.6% market share of the US Search Market. The preferred search engine of Microsoft’s own products (Windows, Edge, Office, Skype, Xbox) as well as the preferred search engine of Amazon’s Alexa – Bing can certainly compete in a growing voice search market.

But Bing’s real power might be in another Microsoft product – LinkedIn. Similar to Microsoft’s Bing, however, the largest professional social network is still definitely in Facebook’s shadow.

Where Microsoft could steal the show, however, is if they were to partner their search and social networks together. PPC pros already know that advertising on both search & social can improve both the performance on both networks and even increase the number of repeat visitors and branded searches. But where Bing would really shine is if it were possible to leverage LinkedIn’s ad targeting directly on the SERP. LinkedIn, like Facebook, offers a myriad of ad targeting methods including by a user’s education, skill, and job title and far surpasses Google’s limited demographic search targeting.

Get In Touch for Digital Marketing Services in Kerala, India